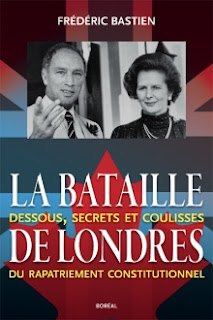 It's nice to see a historian making the news for his research. Frédéric Bastien's book La Bataille de Londres is everywhere these days - spurring the Supreme Court to action, putting the federal government on the defensive, and giving ammunition to the PQ government in Quebec.

It's hard to know if the fuss is really worth it.

It seems that Bora Laskin, chief justice on the Supreme Court of Canada at the time, talked to sources in both the British and Canadian governments about what was happening in the court's deliberations. The issue was whether Trudeau needed to go back to the negotiating table with the provinces or whether he could simply repatriate the constitution simply by action of the federal government alone.

I haven't read the book yet but from what the newspaper stories are saying (and saying), Laskin simply told them that the court was divided. Bastien calls this a 'coup d'etat'. Really? Seems more like it suggests how Ottawa and government in general, actually works. These people know each other. They speak, informally.

If the book has evidence that the government pushed the judges in a certain direction, this would be something more significant. This would be something to be worried about. But telling us that people in high places speak to each other.... Not exactly profound unless, of course, you're upset about the outcome of those negotiations and are a sovereigntist and want any excuse to open up old wounds which, to some, don't seem old at all.

Having said that, it has now been more than 30 years. Let's open up the documents. The 30 year rule has been observed. Let's see what the records show.
Posted by Christopher Dummitt at 12:13