Pundit or Scholar or Both? 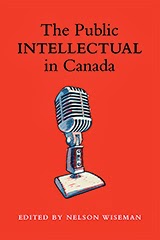 Sometimes reviews can be better than books. I haven't yet read the essays in Nelson Wiseman's edited book The Public Intellectual in Canada but I know that Andrew Potter's review in the Literary Review of Canada is well worth a read.

And what he suggests in the review, is that the book itself is already out of date. Certainly the list of contributors suggests as much. Social media sites, especially twitter, are upsetting the way this world of media savvy intellectuals works.

My own recent experience, though, is that some things remain unchanged. Since the spring hoopla over Harper's history agenda I've had several conversations with producers interested in talking to me about being on radio or TV shows. In the end, most often haven't worked out. One thing remained constant: the people they chose were much more ideologically oppositional, taking one firm position, even if it wasn't as nuanced or reasonable as it could and really should have been. (ie Harper's history project is a monstrosity or Harper's history project is perfectly fine). Conflict works. But intellectuals ought to be good at nuance. It's hard to balance the two - and when you do, if you can see value in opposing views, trying to get to the truth of the matter, the media might not be interested.

Posted by Christopher Dummitt at 11:00