A John A Miscellany 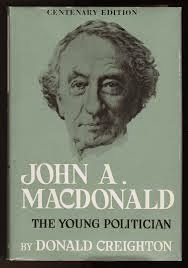 For your John A pleasure, in honour of the old guy's bday, herewith some reading suggestions:

Most recently, look to historian Don Smith in today's globe on the need to rethink Macdonald and his view of aboriginal peoples.

Then look to the same national paper from last week, with three contrasting views of confederation and three fathers thereof, Macdonald, Cartier, and George Brown, by Richard Gwyn and Alastair Sweeney and Barbara Messamore respectively.

Don Smith is perhaps not quite right when he says that his article in Historic Kingston is the only one taking on Macdonald's aboriginal policy. Technically perhaps, but I've always thought of D N Sprague's Canada and the Métis as being part of this revisionist process.

And, of course, go and read (and enjoy) Creighton's masterpiece two volume bio, parts of which can be sampled on google books (here). You'll get a taste for the whole thing.

Meanwhile, we'll all be anticipating Don Wright's forthcoming biographer of Creighton.
Posted by Christopher Dummitt at 11:06