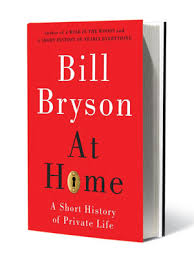 Like many bibliophiles I'm a sucker for the discount table at book stores. So when I saw a deal in Chapters the other day I couldn't help but look a bit closer at what was on offer.

And what should I see but a book of history by Bill Bryson - a book that is about, well, everyday history. I missed it when it came out in 2010, called At Home: A Short History of Private Life. I've only read one of his travel books, but I did enjoy his A Short History of Nearly Everything, a popular science introduction to all kinds of basic science ideas that everyone ought to know. Now Bryson has turned his attention to our private lives, our home life. What kind of historian is he?


Well, at the risk of offending Australians everywhere (who are still smarting at the easy stereotypes in his In a Sunburned Country), I have to say that Bryson does quite well at making the past come to life. The premise of the book is that he takes his own English home, a country rectory built around 1850, and goes through it room by room, using each room to tell the history of the kinds of activities and people that would have been found within it. So we get food history in a chapter on the kitchen, and the history of servants life in a chapter on the scullery and larder, and so on.

Bryson is no original historian, doing extensive primary research. He is more anecdotal than comprehensive, as befits a travel writer, popping here and there through the distant land that is history. But he does have enough sense to treat the past as a truly foreign land, as something that is fascinating in its own right, and which deserves to be explained.

And, of course, he is very funny. He is great on the early cookbooks, especially the influential Mrs Beeton's The Book of Household Management. Mrs Beeton, he says, 'made clear that running a household was a grave and cheerless business.' Despite the fact that most of 900 pages in the book are devoted to giving recipes he suggest that she didn't 'go near her own kitchen if she could possibly help it.' A hint here comes 'when she suggests, for instance, boiling pasta for an hour and three quarters.' He quotes her on garlic ('offensive') on potatoes ('suspicious: a great many are narcotic') and on ice and cold beverages ('It is also necessary to abstain from them when persons are very warm, or immediately after taking violent exercise, as in some cases they have produced illnesses which have ended fatally.').

There is much more, all of it anecdotal and fascinating - plenty of old chestnuts but also some, to me, new information too. His bit on the export of Wenham Lake ice (near Boston) to Europe and around the world in the 1840s is fascinating. So too is the anecdote where he says that the Norwegians changed the name of a lake near Oslo to Wenham so as to 'tap into the lucrative market'.

If he lingers in the houses of the well-to-do a little long, he doesn't neglect the reality of poverty and the homes of average folk. No academic historian would have the breezy confidence to attempt a book like this, full of holes and gaps and leaps of logic. But that makes it all the more interesting to read.

Posted by Christopher Dummitt at 09:58