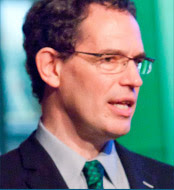 Listening to Neil Turock give the second of his Massey Lectures last night on "Our Imaginary Reality", I kept thinking that there must be something historians could/should do with what he was telling us. Over the last few years I've been a mild dabbler in reading about developments in physics but essentially I'm a scientific idiot: I never even took high school calculus.

Still, it seems to me that given that quantum physics has so much to do with time - with telling us that the way we understand time is entirely wrong - then historians ought to be listening.

Anyone have any ideas? I did a quick google on history and quantum physics but only came up with works on the history of the discipline.

Don't get me wrong. There have been so many wrong turns in applying science to history (Read anything by an evolutionary biologist/psychiatrist as an example - who needs causation, context or explanation? It's that way because of evolution!) But quantum physics seems like it might be different, that if we truly understood it, we would be obliged to rethink everything.

Right now though, it only makes my head hurt.
Posted by Christopher Dummitt at 12:06