The NDP and Quebec – Not a New Bad Idea 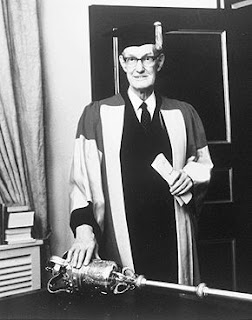 As Thomas Mulcair ingratiateshimself even further with the soft nationalist Quebec chattering classes, it’s worth recalling that this is a very old NDP practice – as old as the NDP in fact. The big 2011 breakthrough in Quebec came after fifty years of trying, desperately trying.

Reading through the letters between the great Canadian historian Donald Creighton and constitutional expert and letter to the editor bete-noir,  Eugene Forsey, gives us a funny snippet on the origins of this very un-Canadian courtship (and I say un-Canadian advisedly).

In 1973 Creighton was in the midst of writing an introduction for a collection of essays by Forsey. He was trying to write a brief biography about Forsey and he wondered wanted to get the story straight about why Forsey, one of the founders of the CCF, had left the New Party. Here’s Forsey’s response:

‘I left the N.D.P. because it deleted from its Constitution, 76 times, the word “national”, on the ground that it “hurt and offended our French-Canadian fellow citizens” (I quote, verbatim, from the speech of the chairman of the committee.) (In 38 of the 76 places, the party substituted “federal.”)  I argued against this two or three times, twice in French, I think, once in English.  I got “turned down like a bedspread,” and left the hall.

Later in the letter, Forsey writes: ‘I have often said… that the N.D.P. Founding Convention was probably the only case in history where some thousands of people gathered to found a new national party and began by agreeing that there was no nation to found it in.’