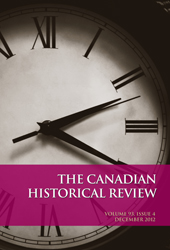 What do bible thumping religious fundamentalists have in common with some Canadian aboriginal historians? Apparently, a lot.

We all know the stories about American schools being forced to teach creationism alongside evolution. Don't talk about dinosaurs to my kids! Those T-Rex's are less than 5000 years old!

Well, the same kind of thing shows up in Canadian history circles too. In fact, it's in the December issue of the Canadian Historical Review.

In a review of the new edition of Canadian Women: A History, Katrina Srigley from Nipissing University explains how she doesn't assign this text in her own women's history class because, even in this latest edition, it is still just 'one' history of Canadian women. Ok. So far so good. Not sure what text exactly wouldn't suffer from the same criticism, but there you go. However....

She goes on to ask: 'What story does this textbook tell my Anishinaabeg and Cree students, as well as their settler classmates?' True, there are more aboriginal women highlighted in this edition and they do talk about aboriginal origin stories. But, she complains, they 'qualify origin stories as historical sources, describing them as "inspiring but vague."' She goes on to say that 'For Anishinaabekwe there is nothing limited about these stories for understanding their past(s), politics and culture.'

Nothing limited. Hmm.... Makes one think about history in a different way if this is how we are to teach it. I'm assuming Professor Srigley isn't going around teaching the truth and 'unlimited' value of judeo-Christian origin stories. My guess (perhaps wrong) is that she would have some doubts about teaching the truth of these spiritual/religious stories. Adam and Eve, meet the Big Turtle. But as for aboriginal origin stories, apparently anything goes.

Having said that, there are some great articles in the December CHR, including a fascinating one on the origins of Daylight Saving Time in Montreal, and another on the history of human rights activists and the question of sex discrimination, this by Ruth Frager and Carmela Patrias.

So it's not all bad.

Posted by Christopher Dummitt at 12:51