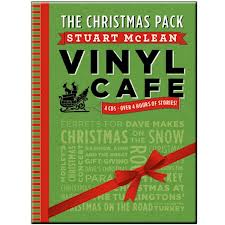 Apparently, I'm a sucker for punishment. On New Year's Eve I tried to defend the indefensible: that is I tried to make a case for why Stuart Maclean's stories on the Vinyl Cafe - you know, the hokey, feel-good ones about Dave and Morley and the kids - are actually good writing.

I didn't pick the best venue: a room full of readers and, alas, writers. They were having none of it.

So now I'm at it again. My own Christmas reading included a novel by the fantasy and historical fiction writer Guy Gavriel Kay. This one was The Last Light of the Sun, a fictionalized (and fantastical) account of medieval England in the time before the Norman invasion, amidst the battles between Celts, Anglo-Saxons and Vikings.

It is, for me, wonderful escapist fiction. Except that, it's not. Or not entirely. In fact, I think Kay might actually be, in his own way, a damn fine historian.

The difference between Kay and some other fantasy novels, is two things: his historical sensibility, and his writing style. When I read novels by GGK I am constantly struck by how he is able to make the ideas of academic history come to life in a fictional world. He makes many things up, and has his own fun. But he also makes academic ideas that could otherwise be quite dry or intellectual, seem fresh and real. I noticed this when reading his novels about a fictionalized Byzantine empire after the division between east and west. I had read with others about how one ought not to see the fall of the western empire in Rome as really being the fall of the Roman Empire, but it probably was in the two novels by Kay that I truly got what this really meant. The same can be said for the intermingling of cultures in pre-Norman England in my holiday reading.

It's an impressive ability.

And it works all the more because he so nicely historically contextualizes even the most minor of his characters. It's a common strategy of his to take a side figure who witnesses something important and sets up who this person is. He gives them a life in his fictionalized historical context. And then we witness the  particular series of events through their eyes. Then it's back on to someone else, and the plot moves ahead. I can't help thinking that, stylistically, historians could learn a lot from this. What he's doing, in a fictional way, is dealing with different eye-witness accounts, people with different perspectives based on who they are (their class, race, gender) and enriching the story with all of these different perspectives. But he also doesn't lose sight of the story's momentum. I'm tempted, for historians, to switch the latter, and call it argument or thesis.

Worth a thought, anyway.

Go ahead: tell me I'm a sucker for simplistic cultural forms. In the meantime I'll be reading the other GGK novel I got under the tree, listening to my new box set of Dave and Morley stories, and working out how all of this is going to help me write the book of academic history I'm trying to write.


Posted by Christopher Dummitt at 14:36