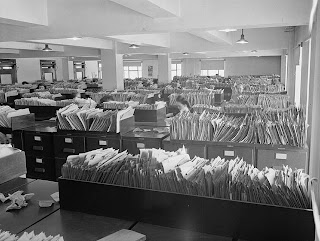 A story from the Montreal Gazette on 9 December 1954 gives a glimpse of a different era in our national archives. The material comes in a column by Arthur Blakely who wrote on political happenings in Ottawa. The column opens up proudly noting how many new collections of private political papers that the archives is collecting, including the papers of every Canadian prime minister since 1867 with the exception of Bennett (papers at UNB). Most are open for research, though some like the then recently deceased cabinet minister Ian Mackenzie were to be closed for some time (in that case until 1975).

So that in itself is a story - a time when journalists were trumpeting the many new collections of private papers that LAC gathered into the national fold.

And then of course there is the now quaint idea that historians were to be treated with some respect: that is, Blakely notes that many papers are closed but 'they are available to serious historians but not to scandal seekers.'

I wouldn't exactly go along with the distinction all of the time. But one does hearken back to a time when LAC acknowledged and appreciated the special relationship between the national archives and the scholars of the nation's history. Elitist? Absolutely. But also a bit more honest than today.