What's in an Ngram

I'm late to a couple of games here - first the great Dusty Bookcase blog of Brian Busby, and then (via his great post on the change from L M Montgomery to Lucy Maud Montgomery)  to the fascinating, time-wasting, and somewhat useful joys of Google's Ngram Viewer.

This is the tool that graphs the appearance of terms in google's library of ebooks. Admittedly, this isn't a perfect database, but what emerges from it can still be very intriguing.

I started with something that had been on my mind, the novelist Ralph Connor. I'm waiting for an article I've written on Connor to appear in the May 2013 issue of Histoire Sociale/ Social History. So I plucked in the name of Ralph Connor and compared it to L. M. Montgomery. I had written in the article that Connor was by far the better known novelist in the early years of the century. Here's what emerged: 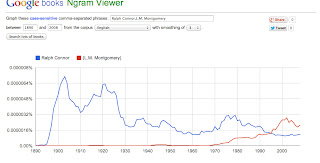 I thought that perhaps I was missing something so I also then included Lucy Maud Montgomery: 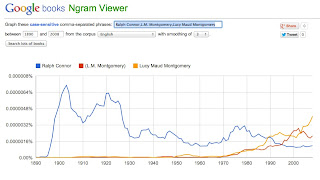 It's always nice to have something that you already think to be the case confirmed (confirmation bias and all). I knew from other documents that Connor had been Canada's leading author in the early years of the twentieth century, and certainly that he had been widely popular outside of Canada as well, especially in the United States. But I thought I'd do one more comparison so I compared Connor with Anne of Green Gables, thinking that this one term might have often stood in for Montgomery herself. 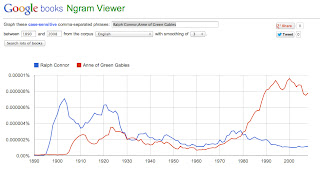 This probably gives the best representation, showing Connor as the more popular novelist in the early 20th century, but not by as much. And the real change came, as I suspected, in the midst of the rise of CanLit in the 70s and especially with the Anne of Green Gables films and then the Avonlea TV series in the 90s.

Finally, I thought I'd test out the book I'm currently writing, on the afterlife of Mackenzie King. Here is how he fares: 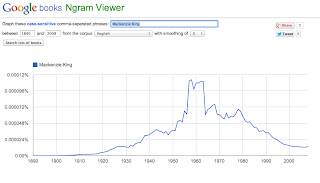 And here again I was pleasantly surprised to see that the mention of King soars after he dies - that it is in this context that he enters the great meaning-making machine of public memory. I was a bit surprised to see the most mentions came in the late 50s, early 60s as I thought the peak might have come in the 1970s. But I wasn't at all surprised to see that mentions start to fade away in the 1990s to today. So this argument I'm developing about the way Mackenzie King mattered to a couple of generations of Canadians in the years after he died, might not be that far wrong after all. Thank you google Ngram.

Posted by Christopher Dummitt at 10:41