I'm not going to be popular in some Canadian history circles today.

Last week I had a great long conversation with Terry Glavin about a column he was writing for the Ottawa Citizen. He wanted to talk about the ongoing battle over commemorating Canadian history. Aside from being a journalist Glavin is a historian in his own right, and I was struck by how familiar he was with many of the debates and personalities in Canadian history.

The column is out today (see here). But what he says, and what he quotes me as saying, are bound to make a few Canadian historians splutter. 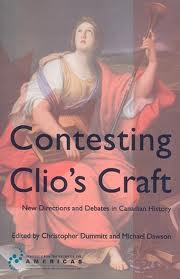 First, he talked to Jack Granatstein and conveyed his sense of how Canadian historians have given up any effort to celebrate the nation's past. Then he drew on many of the arguments I made in my own article on the state of Canadian history  - published a few years ago in an article called 'After Inclusiveness' in the book I coedited with Mike Dawson (Contesting Clio's Craft). This is the story of how inclusive historians have increasingly given up telling national stories, and telling them in ways that are interesting and engaging for a wide audience.

A few years on I would modify some of what I said in that article - point to a few more exceptions of great work being done. But by and large I stick by it. And, after teaching in a grad class this week about the rise of 'history from the bottom up', I would have made what seems to me to be an even more important point. What's missing from this kind of history is a curiosity about Canada's nation makers.

There's plenty of curiosity and fascinating analysis of aboriginal peoples and the marginalized (and the many ways they have creatively exercised agency). But there is, overall, a decided lack of curiosity about other people who don't fit into these categories. And perhaps even more important, what is absent is  a curiosity about (and an openness to) fairly important features of Canadian life that make this country, by and large, not too bad to live in (the rule of law, parliamentary democracy [for all its flaws], and the making of the nation itself).

Because, in another sense, he's not. There are a number of great historians doing fascinating work across the country. And this intellectually faddish phase will pass, just as others did before. Hopefully we'll take the good and leave the bad. But that might be too optimistic.


Posted by Christopher Dummitt at 11:28