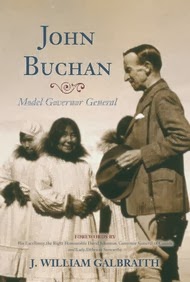 The latest issue of the Dorchester Review has a short essay that could spark interesting debate. It all depends on how you want to remember John Buchan - Governor General, famous author and, as Ian McKay and Jamie Smift recently wrote, 'concentration camp administrator.'

An odd and unpleasant combination.

But not so fast. J William Galbraith takes issue there with the way that Swift and McKay have presented Buchan in their book Warrior Nation. Galbraith is the author of the recently published biography of Buchan (which focuses especially on his years in Canada as Governor General). He suggests that McKay and Swift are taking advantage of the postWWII meanings of the term concentration camp to make a swift, negative attack.

According to Galbraith, the camps in question were in South Africa during the Boer war. These were refugee camps where Boer women and children were kept after Kitchener's army swept through the area. They had, he reports, a pretty terrible record  of cramped space and high mortality rates. Sounds bad.

But Galbraith claims that Buchan was brought in to deal with the problem in 1901. Within a matter of months, morality rates were declining as Buchan's changes improved the camps. The camps were meant to win over the Boer families and the Boer commander Louis Botha admitted being thankful that they existed.

I confess to not at all being an expert on the South African war. But it makes for an interesting controversy, and a nice sign of genuine debates when someone picks up a historical figure to make a contemporary political point, and is called on it.
Posted by Christopher Dummitt at 09:00 No comments:

Think you could pass an English year 7 (Cdn grade 6 I think) history quiz? Well give it a try over at History Extra.