Me, the Dorchester Review and the British Empire 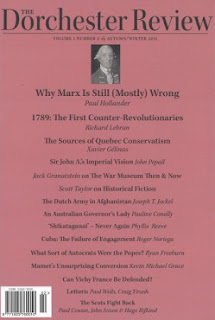 Is anyone out there following the Dorchester Review? This is, according to its website,  a relatively new 'historical and literary review'. That's putting it very generally and, well, mildly.

This is definitely a right of centre periodical - an attempt to introduce into the intellectual discussion in Canada (and not only Canada) a different kind of discussion.

I have more than mixed feelings about much of the content, but I can't help but admire the
'relevance' of much of what it does. It's something other historical periodicals in Canada could learn from.

Recently I responded to an essay on the place of the British Empire in Canadian history, by one of the editors, Chris Champion. You can see the original essay (here) and my response (here).


Posted by Christopher Dummitt at 10:56