Who is the Quebec Electorate?

If after reading the above title you're wondering why I've suddenly lost even the slight grasp on English grammar that I once had, let me say that I'm not alone. But I'm not speaking really about grammar. Didn't you know that there is such a thing as the Quebec electorate? Don't worry there's also a Canadian electorate and an Ontarian and a Nova Scotian electorate. This is the person (plural but also amazingly singular) who sits down before an election and decides that a particular party should get power. They/It then casts votes (many votes but let's not let that get in the way of saying it is just one result and one will at work) that will put party x into power and toss out party y. It also decides, this singular/plural electorate, that a particular party (let's say the PQ in Quebec) should 'win' the election but only barely, so it should only get a minority government. The electorate is all knowing and all powerful. It may consist of millions of individuals but it makes this decision unilaterally with a single thinking mind and will.

If you think I've lost my marbles, you are absolutely correct. But I'm not alone.

This is the only conclusion that one can possibly draw from the way Canadian journalists (and not only Canadian journalists) talk about elections in this country. We learn today that the Quebec electorate wanted Pauline Marois and her PQ party to win the election, but that they weren't so certain about how much power they should have. (We are reassured every other minute that support for separatism is at an all-time low.) So the Quebec electorate decided to just give the PQ a minority government. 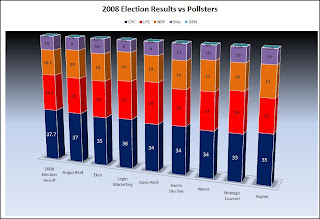 What an amazing feat. Here I was, a simple historian of Canadian culture and politics, with only the barest grasp of the way parliamentary democracy works, thinking that a whole slew (millions) of Quebecers voted yesterday with a whole bunch of different intentions. I would swear that there were quite a few Quebecers who wanted the PQ to form a government, even a majority government. There were even many who still wanted the Liberals to do the same. And there were others who wanted to vote for Quebec Solidaire and the CAQ. But apparently individual decisions matter not at all. Once an election is done, the many individuals with many competing views become transformed into the electorate.

This is, of course, utter rubbish, and dangerous rubbish at that. It is one of the most undemocratic features of our contemporary political discourse. It is what lets parties that get only a smattering of votes (say the 32% of the PQ or say the 40% of the national Conservatives or the 40% of the Liberal majorities before them) to rule as if the Canadian or Quebec or whatever electorate really wanted them to be in power. To hell with the majority of other people in the population who wanted something else. They become meaningless once someone has 'won' an election.

And more importantly, their representatives in parliament, the members of parliament, become merely part of the opposition, creatures who get in the way of the government and that most important creature of all: the singular/plural mystical creation of journalits: the electorate. All hail the electorate! Now get out of the way so it can do its job.
Posted by Christopher Dummitt at 10:42